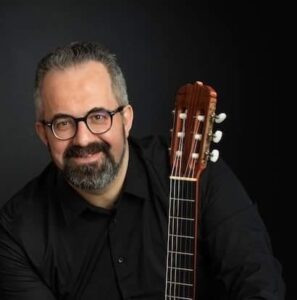 Many international newspapers have been interested in the figure of Christian Saggese: the Spanish newspaper “El Pais” considers him “among the best guitarists in Europe”, the Spanish newspaper “El Mundo” describes him as ”one of the most prestigious artists in the world.” Born in Verona in 1974, he approached classical guitar at the age of eleven, studying privately with Candido Lodezzano and subsequently perfecting himself also in electric guitar and harpguitar. Under the guide of Angelo Giardino, he obtained the diploma in classical guitar with full marks cum laude at the Conservatory of Music “Antonio Vivaldi” in Alessandria. Subsequently he attended for three years the International Superior Academy of Music “Lorenzo Perosi” of Biella, achieving in 1997 the Diploma with judgment of Excellent. Beginning the concert career in 1992, he holds concerts as solist and in chamber formations in Spain , Portugal, Germany, France, Russia, England, USA and Japan. Winner of some of the most important guitar contests, starting with the First Prize at the International Competition “Andres Segovia” in Almunecar, Spain (1999), at the “Vincenzo De Bonis” at the International Competition of Cosenza (2001), at the ” Pittaluga ”of Alessandria (2002) and at the National Competition” Ebe Cazzaniga Ansalone “of Abbiategrasso, Milan (2001), up to the prizes in international competitions, as the “Francisco Tarrega” in Benicassim, Spain (1995). He held masterclasses in the most famous international music festivals in the world. He has recorded several albums including “Angelo Gilardino-Mozartiana” 2013 Asti produced by Guitart (CD); “Richard Barbieri – Planets + Persona” 2017 Frascati produced by Kscope Music (CD); “Trascendence in the Age of War” 2009 Prague – Music by the American composer John Carollo (CD), – “Italian Excellence” 2018 Rome – Produced by the Musical Association Guitar In (CD). Since 2015 he has been the “Aquila Corde” testimonial, guitar strings. He is the dedicatee of works composed by Angelo Gilardino, Carla Rebora and John Carollo. He has worked with Mauricio Kagel, Area, Gyorgy Kurtàg, Jakko Jakszyk, Percy Jones, Guy Pratt, Richard Barbieri, Tony Levin, Adrian Belew, Trey Gunn, Pat Mastelotto, Marco Minneman, Isildurs Bane, Julie Slick, Morgan Agren, Michael Bernier, Mick Karn, Janne Schaffer, Jerry Marotta, Ares Tavolazzi, Mike Keneally, Pamelia Kurstin, Tom Griesgraber and many others.

12th SEPTEMBER  18.30
ANDREA DIECI
“The Nocturnal by Benjamin Britten: history and analysis of a masterpiece ” 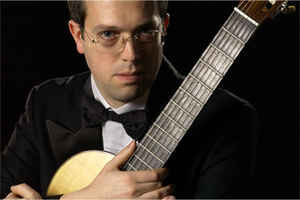 Andrea Dieci studied in the class of Paolo Cherici at the Conservatory “G. Verdi ” in Milan, where he graduated in 1989 with the highest marks cum laude and special mention. He also studied with Oscar Ghiglia, first at the Courses of the Accademia Musicale Chigiana in Siena (again with a Diploma of Merit), then at the Musikakademie in Basel, earning him the Solistendiplom in 1992. He participated in masterclasses given by Julian Bream. He won the 1st Prize at the International Competitions of Gargnano, Lagonegro (dedicated to 20th century guitar music) and “De Bonis” of Cosenza, as well as the Special Jury Prize at the 1989 ARD-Musikwettbewerb in Munich. Defined “an impressive guitarist” by the Times Herald and “a true classic guitar star” by the Corriere della Sera, he has held hundreds of concerts for important musical institutions in Europe, the United States, Central and South America, Asia and Africa, appearing at world-class events such as the Spoleto Two Worlds Festival, the International Guitar Foundation of America Festival (GFA) and the Singapore International Festival. He is the dedicatee and first performer of numerous works by contemporary composers. He has participated in radio and television programs broadcast by RAI, Vatican Radio, Radio Nacional Española, BBC, Radio Swiss Italian TV and Euroradio. He has recorded numerous CDs for the record labels MAP, Nuova Era, Bèrben, DotGuitar and Brilliant Classics, including monographs on Manuel Maria Ponce, Nicola Jappelli, Astor Piazzolla (2 CDs in collaboration with violinist Piercarlo Sacco) and Fernando Sor (Complete Sonatas for guitar). Of particular importance, the recording of the complete works for solo guitar by Toru Takemitsu (MAP, 2004 – “Chitarra d’Oro” 2005 for the best album of the year at the International Guitar Convention of Alexandria), Heitor Villa-Lobos (MAP , 2009) and Hans Werner Henze (Brilliant Classics, 2016 – “Chitarra d’Oro” 2017 for the best album of the year at the International Guitar Conference in Alessandria). He is the only guitarist to have recorded the integrals of these three important authors. A new recording of Takemitsu’s complete works was published by Brilliant Classics in 2018. Appreciated professor, he held masterclasses and seminars for renowned musical institutions in various countries of Europe, in the USA, in Mexico, Brazil, Singapore and Japan. He holds the chair of guitar at the “Vecchi-Tonelli” Higher Institute of Music Studies in Modena. He also teaches at the annual specialization courses at the “Giulio Regondi” Academy in Milan.